To view all of the items/documents related to the Geek Therapy trademark mentioned in this letter or to comment, visit this post on the GT Forum. And to hear more from Josué on the trademark situation, listen to episode #195 of GT Radio.

The following is an open letter to Dr. Anthony Bean regarding the Geek Therapy trademark:

I’m writing to ask you to reconsider your recent trademark applications for the terms GEEK THERAPY and the related term GEEK THERAPIST. But first, I’d like to review what has happened so far.

Your lawyer has informed us of your desire for a coexistence agreement and negotiation, stating that there would be no confusion between your services and mine because I run a “media and entertainment company.” On May 9th your lawyer called again to suggest that we limit our mark to “entertainment” categories. The reason why we turned down your suggested coexistence agreement is that “education, psychology, and mental health” are at the core of everything my Geek Therapy is. Geek Therapy, the media brand, is built upon the Geek Therapy model of therapeutic services that I coined in 2011. Since then, I have researched, developed, practiced, and taught this model called Geek Therapy. The Geek Therapy “media and entertainment company” your lawyer refers to is one of the vehicles by which I teach and promote my Geek Therapy model.

You wrote that you are going to “define Geek Therapy” with colleagues in the future and that you began doing this in February 2019 (according to your trademark application, see Item 4) but I have been defining and developing my model, called Geek Therapy, with colleagues since 2011.

In 2013, Dr. Patrick O’Connor and I co-created a graduate course about integrating Geek culture into psychotherapy practice to be taught at the Chicago School of Professional Psychology. Dr. O’Connor ultimately decided to call the course “Geek Culture in Therapy” and not Geek Therapy because he recognized that Geek Therapy is my model and what he would be teaching was ultimately his version of integrating Geek culture into therapy and not mine. I still guest-lectured on my Geek Therapy model during each semester the course was taught.

In 2014, Dr. Stephen Kuniak invited me to share a booth with him at New York Comic-Con. It was a funny-looking booth with a 10-foot Geek Therapy banner advertising my research and  a tablecloth for Dr. Kuniak’s research. While we share many similar ideas, our work is our own. During that weekend we presented our own and each other’s models as distinct offerings.

Many people recognize my work and model of Geek Therapy. When Dr. Lawrence Rubin asked me to write the foreword to his upcoming book Using Superheroes and Villains in Counseling and Play Therapy, it was not in my capacity as the founder of a media and entertainment company but in my capacity as a mental health professional who spent years developing, teaching, and practicing a model called Geek Therapy, which integrates Geek culture into therapeutic practice. When I present at conferences, give workshops, or provide consultation, I am teaching my Geek Therapy model.

An article in The Daily Beast once labeled the work of Dr. O’Connor, Dr. Kuniak, Dr. Rubin, and myself as “Superhero Therapy.” A few years later, when Dr. Janina Scarlet created her own model of integrating Geek culture into therapy, she coined it Superhero Therapy. Despite Dr. O’Connor, Dr. Kuniak, and I being previously associated with the term, we respected Dr. Scarlet’s choice because we each had our own model at that point, with unique branding. I wish you would respect my use of Geek Therapy in the same way.

Instead, you have announced that you want to begin the process of defining “Geek Therapy” in 2019, something that I have been doing since 2011 with the help and support of Dr. O’Connor, Dr. Kuniak, Dr. Scarlett, Dr. Travis Langley, Dr. Ali Mattu, Lara Taylor LMFT, and many others.

I have learned a lot about trademark law since February and I believe this situation comes down to two things. First, is there a likelihood of confusion? For years, my work has been featured in professional mental health publications. I have presented at conferences and conventions and been invited to speak overseas. When you announced your book, people contacted me assuming I had something to do with it. And one of the contracted authors for your book was surprised to learn I was not involved in your book and informed you that they assumed you had at least run the title by me. Your use of the trademarks has already caused confusion and I believe it will continue to cause confusion.

It would then come down to the second point: Who used the trademark first? You have admitted your intention to develop, in the future, a model and set of standards and call it Geek Therapy. According to your trademark application, you started this process in February 2019. I have been developing, practicing, and teaching my model, called Geek Therapy, since 2011.

Therefore, if you do not abandon your trademark applications, I will oppose them as I believe that your use of the trademark would cause damages to my use of Geek Therapy. You have put me in a position where if I do not oppose your applications, I will forfeit the brand recognition and trust that my colleagues and I have worked so hard to build.

I am not opposing your intention to create a certification for the use of Geek culture in therapy. I told you in an email (Item 3) that I was happy to hear about your book. I support you and your colleagues developing a set of standards of some kind. I have no objections to any of those things. What I am opposing is that you call it Geek Therapy or Geek Therapist.

I am happy to hear that you wish to avoid litigation and want to negotiate. I also prefer to avoid litigation. But your first offer to negotiate implies that  I would have to give up my use of the GEEK THERAPY mark because now you want to use it, for almost identical purposes. And you have implied that I would need your permission to use the GEEK THERAPY mark, despite being credited as its founder for years.

The question I have received the most since this situation started is “Why doesn’t Tony choose another name for what he wants to do?” I have asked myself the same thing. I suggest you find a new term for your proposed model and standards. I’m happy to see more people talking about integrating Geek Culture into therapy, but GEEK THERAPY is my brand. I have been using the Geek Therapy mark for entertainment, education, community building, psychology, mental health, and therapy services for 8 years, and that is why I, with the support of many people who have helped build Geek Therapy into what it is today, will oppose your trademark filings during the opposition period. A process designed for situations like this, in which the need arises to protect one’s trademark and hard work.

To view all of the items/documents mentioned in this letter or to comment, visit this post on the GT Forum. And to hear more from Josué on the trademark situation, listen to episode #195 of GT Radio.

Item 2 - Cease and desist letter sent by Josué on February 8, 2019. A similar letter was sent to Emmet Dages at the book publisher Taylor & Francis Group. 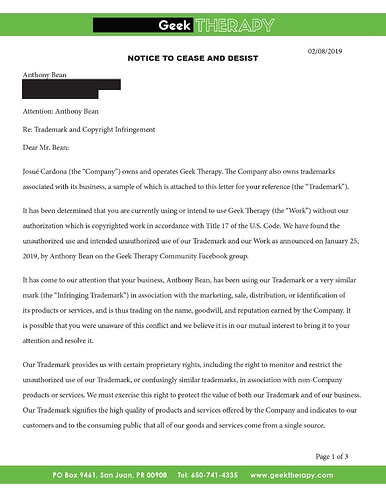 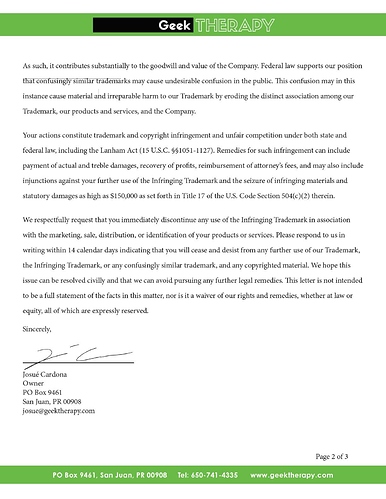 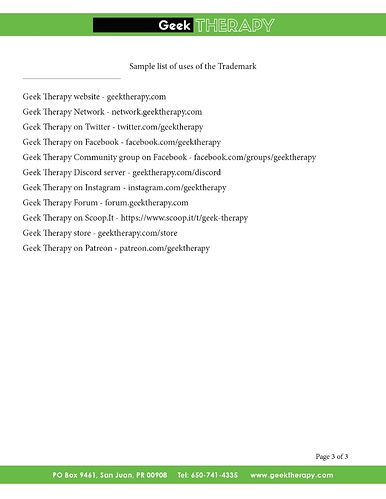 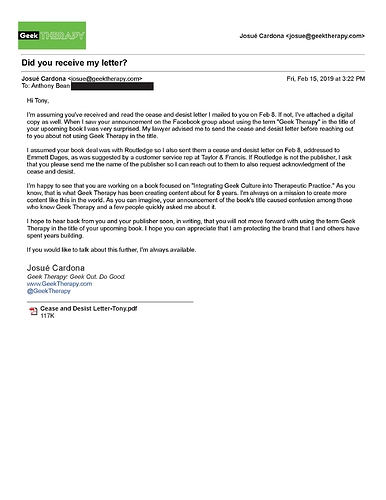 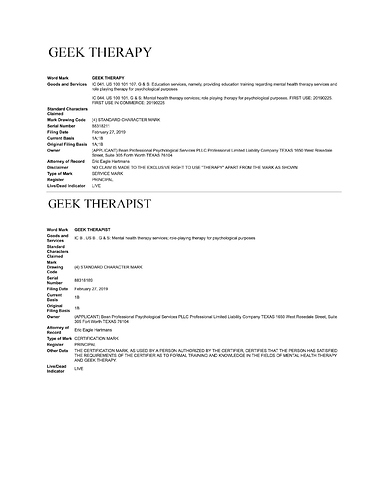 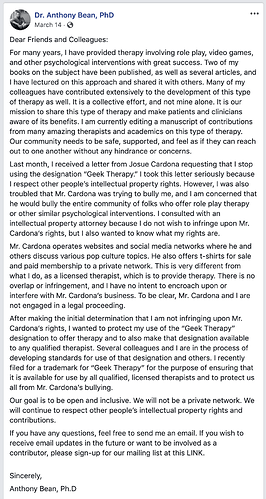 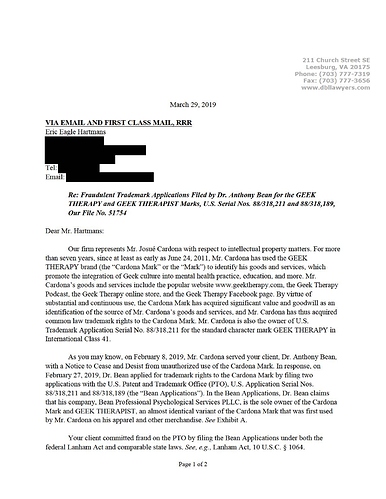 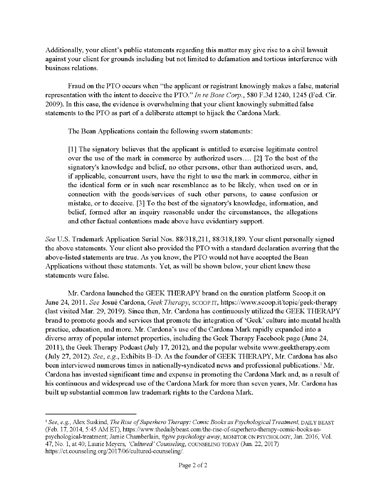 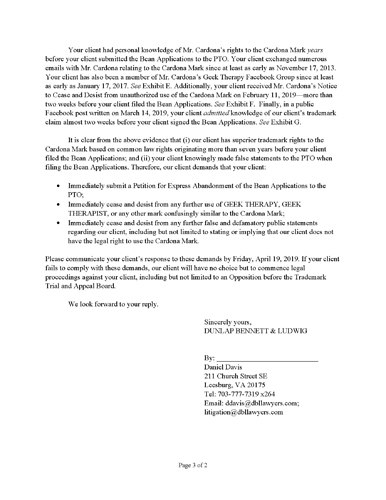 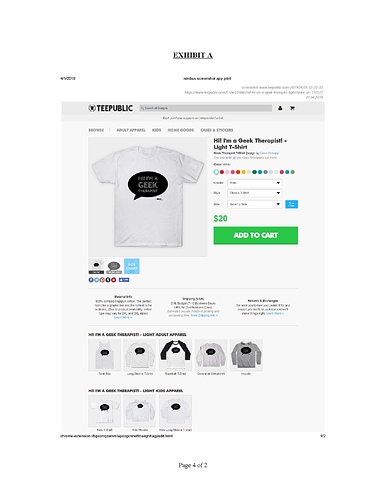 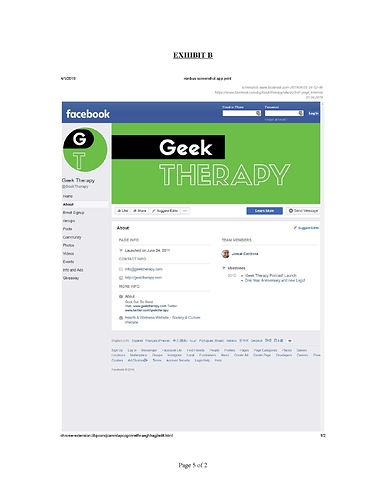 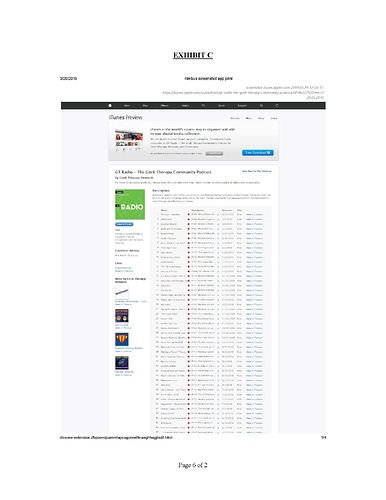 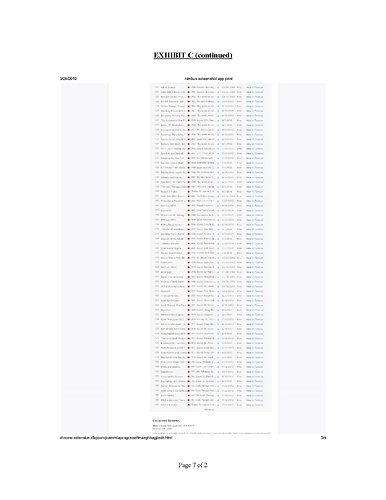 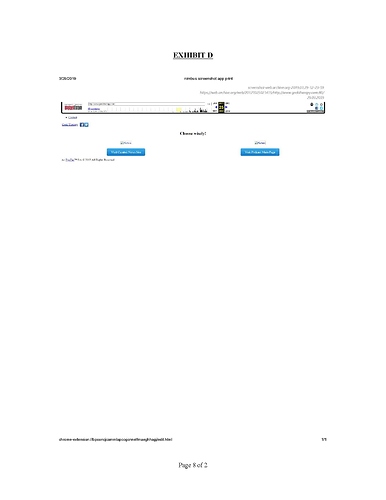 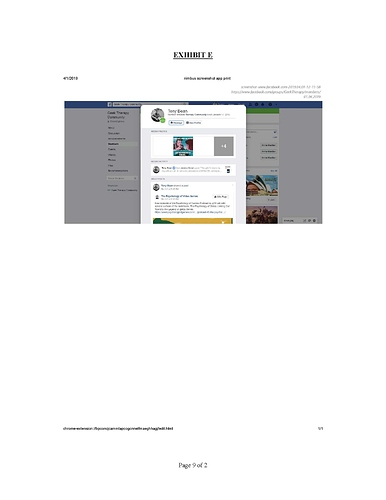 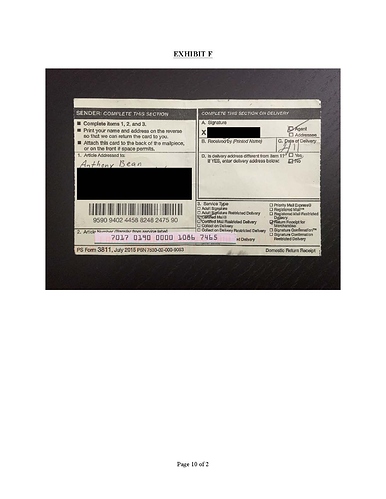 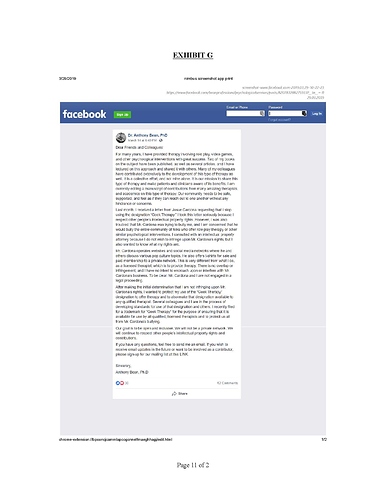 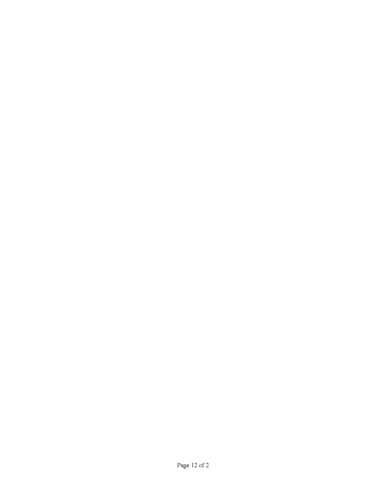 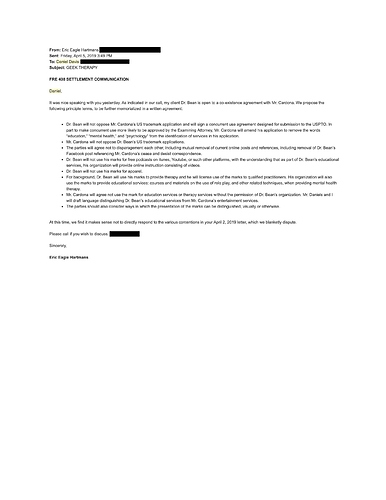 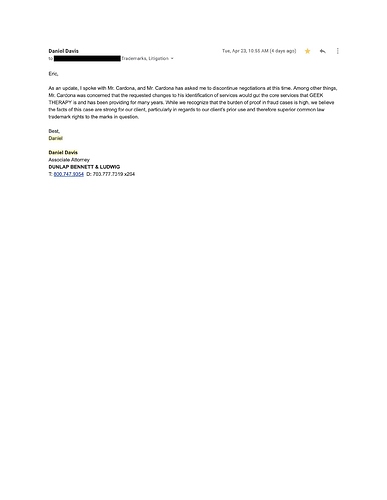 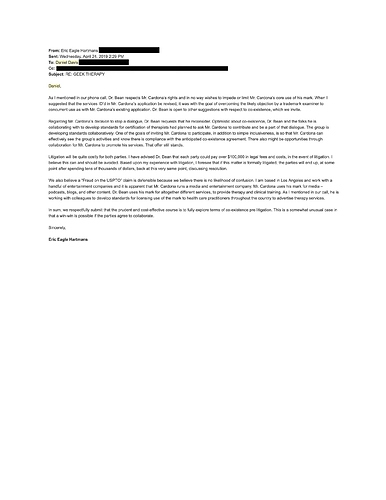