Why when I play a female fighter or wizard or ranger or whatever when I play a video game the higher level my character is the less armor my character seems to be wearing. My armor class is higher, that is cool, but it looks like I’m riding through Azeroth naked, or in a bikini. 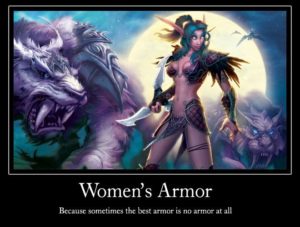 But when you pick up the armor in any dungeon, it will look like a really cool breast plate, or chain mail pants

and when you put it on it’s like a loincloth. Is this what guys are looking for? 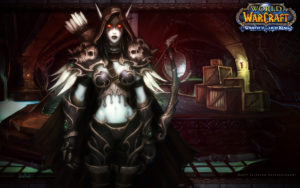 Anyway these costumes are not practical. Women in comic books, anime, video games really do allow for more movement but other than that they do not allow for more protection. In comic books our super hero’s are dressed in belts and straps. Boys idolize these looks but do not women to actually dress like this.

They would prefer women to be dressed like the movie version of Gamora. 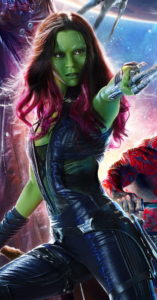 So fully clothed in real life and naked every other time. Women are made to fit roles that are forced on them in society. But when women follow the role and embraces it, she is ridiculed and demeaned. http://knowyourmeme.com/photos/1216223-virgin-killing-sweater . This sweater was created in a meme from a cosplayer, and now has gone insane. Many cosplayers, have purchased it and done photoshoots in it. Of course there have been trolls who anonymously behind their computer screen safely tucked behind their laptops, they insult these cosplayers or degrade them. There are 155 million Americans who play games regularly and out of that, 48% of them are female. When approximately half of the gamers being female, it is still not " safe" for female gamers. It’s not just small insults of being called a noob or loser, when a man knows a woman is playing games it is rape jokes and insulting their looks, even though they don’t know how they look. But, why would they think that a woman should be treated any different from their “naked” characters in a game.