How Video Games Changed My Life

Originally Written in Feb 2016 - ​In the beginning

During my early youth, around the age of 11-12 (1999-2000), I spent my time being totally consumed by Pokémon trading cards and Pokémon Red which I played on my Gameboy Original, what loyalty, as the much improved Gameboy colour was also available at this time. I spent hours with one particular friend I remember ‘Anthony H’, who was just as engrossed as myself in the whole Pokémon world - we literally spent the whole summer of Year 8, which I believe was the year 2000 at his grandmother’s house either playing football, causing mischief or battling Pokémon. At this stage of my life, I wasn’t paying much attention to the benefits I was getting from the game such as; social interaction, reading skills, using basic databases (Pokédex), learning about evolution, nurturing Pokemon to make them stronger, developing a massive memory bank of navigational skills, tips, tricks and the like all of which are all massively transferable skills which may have shaped who I am today.

From the age of 13 onward I played LMA manager on the PlayStation 1 as I never did buy a PlayStation 2. However, my involvement with games became a lot less frequent, falling below 4 hours a week. Before the days of Facebook and Smartphones this actually existed. But gaming had captivated me once before and I had a sense that I was just waiting for the right game to come along before being re-submerged.

Year 9 was a huge year for me, I made so many mistakes when it was the time to start becoming an adult. My friends were intelligent but a poorly behaved bunch who knew how to get-by academically but were up to no good outside of school. Things got progressively worse and we began to hang around with an older set of people who had already left school. Some of my friends by now were experimenting with drugs, were sexually active and starting to smoke weed on a regular basis. My mum and step Dad were going through some relationship difficulties and didn’t really do a good job of keeping it behind closed doors. They would argue, fight and create a cut-throat environment in the house, needless to say I had limited opportunities at home to interact harmoniously, so I was going out more and more and starting to be influenced by risky behaviour. I’m not going to state what exactly ‘risky behaviour’ means, but as a father I would be horrified if my son had been involved in such activities. As a youth worker and with my work-hat on I’d have said that I was in a position that was ‘unstable’. I was able to project the illusion that everything was okay at home, such as; keeping on top of my basic chores and looking after myself physically, but in reality I was, at 13 years old involved with in a soft core gang/crew, I had easy access to drugs, and was being influenced by people 5-6 years older than me and in truth, academically I was suffering. ​ My older brother at this point lived in a house a few streets away and would often go away at weekends. So we would go round his house to chill out and even though my brother tried his best to keep us out at times, we found a way in. Although we were up to no good, my brother felt that we were safer in his house than on the streets. Sometimes there would have been up to 20 people crowded into his small terrace house. I have so many fun memories of this time, but also a few serious ones. One particular instance was when a group of youths kicked down my brother’s door wanting to have a fight with me. #nothanks

My older brother moved back home and was soon trying to get me involved with a game he was obsessed with called Unreal Tournament. I’ve never really liked first person shooter games but I reluctantly agreed to help him setup a LAN game because he had purchased his first router. After only 2 hours of helping him I found myself on a server slaughtering other online players and team chatting with my brother who was upstairs. We played a MOD on the game called the ‘Zark Rifle’ which was like a fast sniper. We soon discovered the Elarial server and their website that kept stats and well that was it, we were both totally consumed. ​ It was around this time that I decided that I wanted to stop hanging around with the group I was involved with and made the choice to make friends with another group, it’s kind of like that at school isn’t it? That’s when I began to hang around with some of the best friends I’ve ever made; ‘Chris B, Matt C, Arron W’ and so on. I also met my girlfriend Char H and although he have had a couple of break ups we’re still together today.

Elarial was a good experience, but my brother and I wanted more. We searched for another clan who could compete to win. We eventually found the {AS}Allstars clan from Holland. This was when I met ‘Napa’, Napa was the clan leader for {AS} and is 3-4 years older than me. He had excellent leadership skills; was able to communicate with perfect English and basically became my idol. My brother at this time began seeing a new girl so his involvement died out somewhat, but for me I was playing UT for almost 3-4 hours a day!

Together Napa, myself and the {AS} Clan took on the world and we didn’t do too badly! Check out our stats: I believe that if eSports were alive during this time, we may have had some superstars. 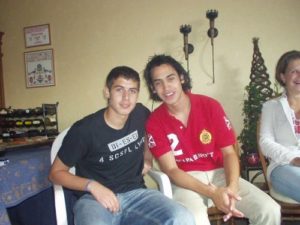 Here I am with {AS}Napa 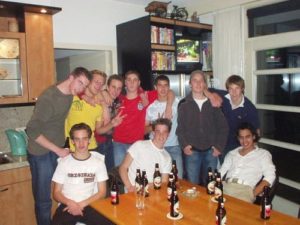 ​How Unreal Tournament saved my life

From my brother shifting my attention to a new game I was able to seek less risky behaviour because I had a new sense of hope and purpose. I knew that being on the street messing around wasn’t sensible but I was ‘bored’ and had nothing better to do. I was able to make more logical choices purely because I wanted to be able to maintain my new hobby, I made new friends, I had a girlfriend, and my academic progress was back on track. So much so that in year 11 I gained student of the year from my form tutor.

A massive part of my character, moral foundations and ability to find solutions in difficult situations is down to the {AS} clan leader Napa. Being online still exposes people to social interactions, just in different ways, either forums, team speak (microphone) and MSN instant messenger. At the time, Napa was interacting with me for hours per day - he reminds me of Jose Mourinho the football manager in the sense that he was a great friend and coach. We would train on regular days, we would have tactics that he had devised, attacking routes, communication hotkeys to speak quickly, positions to stick to and Napa’s attention to detail was amazing. He was able to do all of this as though I were the only one that mattered, that I was the reason the team was winning. I wonder how many other people he was able to make feel that way.

My home life between my parents was not good; they were on, off, on, off and eventually they split up. I was able to deal with this I believe, because I had a mechanism to escape to a world where I was famous, needed and wanted. That ability to regulate my emotions in a safe way helped me deal with my real life struggles. I was able to talk to people online about personal issues that I would find difficult in real life.

Online I was a winner and this had a transferable impact on my real life - I gained confidence from this, I was interacting with older mature lads every day and this experience allowed me to transfer this maturity into real life. Out of 5 close friends who signed up for sixth form I was the only one to finish, I was becoming a winner in whatever I put my mind to.

What the future holds

The whole experience has left me with a vivid memory that’s happy and allows me to look back at those years with great joy. Video games are not a full stop solution, I’m not advocating that people should spend all of their time on consoles so that they will become complete people - this would be a false statement. But, what I am saying is that under the right circumstances, with the right people, and for the correct amount of time, you can change your life for the better.

Now my passion is to study the benefits of gaming further, to see whether it does have a deep rooted ability to help people’s well-being when utilized in the correct way. I want to help vulnerable young people who spend a lot of their time online to understand the online risks and to educate them into becoming a positive citizen when they’re online so they too, may benefit like I did.

I hope to mentor young people so that they too will be able to see the light and be able to make more logical life choices by withdrawing from risky behaviour and becoming part of something better and more positive.

​Further learning opportunities from my blog

Unreal Tournament was a first person shooter, rated 18. I feel the game didn’t make me a violent person. I would say I was addicted to the game, and easily played 25 hours per week. The recommended healthy amount of game play is between 8-10 hours per week (on average). I personally feel that when playing games, it is the interactions involved within the game that shape our impression of the game and our experiences gained from it, not necessarily the content of the game but rather who we play with and how they interact with us.

The importance of a role model, coach, parent, and mentor in my opinion is huge. They can influence us massively, and develop core beliefs that we continue to feed and pass onto our own children and the people who look up to us. I am just thankful I found my brother and the {AS} clan when I did. (Here’s a good piece on coaches that I’ve read recently: https://medium.com/@james_hamlin/why-we-all-need-a-great-coach-d9973e83f662#.qz9j774iz)

More research is needed on the effects of gaming on vulnerable young people and those with mental health issues.

Thank you for reading.