Geeks Are Not Children in Grown Up Bodies

Originally published at: Geeks Are Not Children in Grown Up Bodies -

Something that has come up a lot for me recently (and for pretty much my entire life) is people assuming that I need to grow up because I am into geeky things like video games and comics. They assume that it’s just “kids’ stuff” and write me off as someone less than an adult because of my interests. 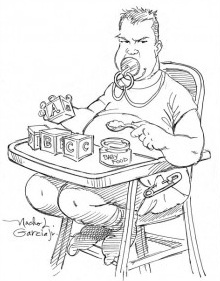 This is not a geek... and it's actually a little creepy.

No matter that I graduated from college with honors, I currently hold down a full-time job while attending graduate school, I live on my own and pay my own bills, and I’m getting married next year. For some reason, many people who aren’t into geek culture have decided that being a geek and being an adult are mutually exclusive.

This is definitely not the case.

When we look at people with other hobbies, we tend to think that what they did as adolescents is okay to carry on into adult life. Jocks are able to continue playing sports, either professionally or recreationally, and no one bats an eye. As adults, we are encouraged to continue our fandom over the home team that we loved as children. If we don’t, people look at us as if there’s something wrong with us. 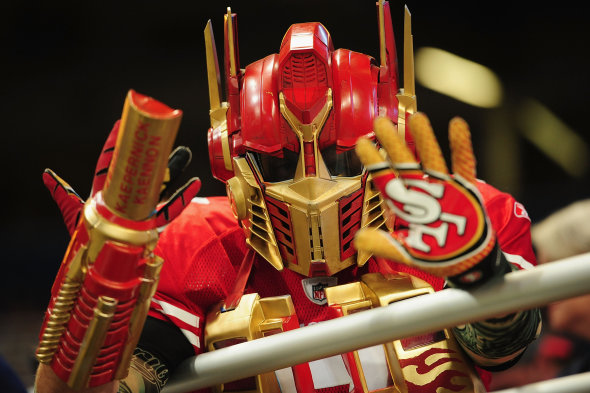 Would this transformer be as "cool" if it weren't sports themed? (I say yes!)

Auto shop kids who keep working on cars throughout life, even if it isn’t their career, are seen as well adjusted adults. My brother-in-law is building a WWII era Jeep and (other than the fact that it’s costing a lot of money) no one really has a problem with his hobby. In fact, everyone around him seems to think it’s pretty cool.

Even artistic kids who are encouraged to explore other options for viable careers aren’t chided as often for having creative hobbies. Many people are painters, sculptors, designers, and jewelry makers in their spare time. As long as they aren’t sleeping on their parents’ couch or hitting up their friends for money all of the time, their hobby (or career) is respected.

So why is it that geeky hobbies are so looked down upon?

Many times these other hobbies I’ve mentioned are seen as useful skills. If someone can demonstrate physical prowess, build a car, or create something it is considered that they have a talent that can be good for society. But what do geeks have?

Geeks have passion. Whether their love is Halo, Dr. Who, My Little Pony, or Game of Thrones they dive in with all they’ve got. (The collectible industry loves to capitalize on that!)

Geeks have a multitude of skills to pull from for daily life, depending on their form of geekery and their strengths. A gamer may have great problem-solving skills and hand-eye coordination. Some geeks may be good at writing or art and find their way into the gaming, comic, or film industry as creatives. Others may have great attention to detail (such as your stereotypical Star Trek nerd that knows what happened in Season X, Episode X and will tell you how it contradicts this other episode…). A tech geek may be your lifeline when your computer crashes and you NEED that file for your meeting in the morning… The list goes on. 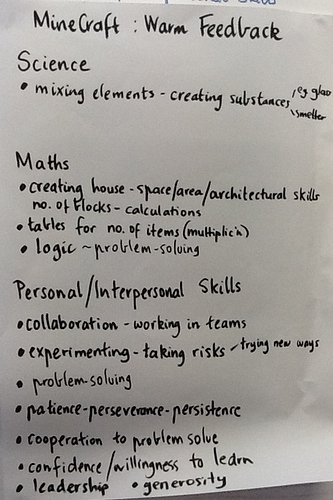 533×800 114 KB
Minecraft is one example of geekiness teaching important skills.

Geeks also have heart. They empathize and relate to each other in ways other people cannot understand. One of my professors told me that the reason I work so well with kids and teens (as well as adults) as a clinician is that I “get it”. I connect with them in a way that others don’t. I express interest in what they do and what they love, regardless of how I feel about the subject, because I know what it’s like to love something that much. I bring myself to my clients, and keep it real, which shows them that it’s okay to be real with me.

Now, just because I relate to teenagers and like geeky things, that doesn’t make me an adult that never grew up, or a teenager stuck in an adult body. In a class discussion about culture in which I brought up my identification with geek culture, I had a classmate ask me if I also identified with adolescent culture. At the time, I told her that I did, because I was able to relate to them so well. After thinking about it, I wish I had told her no.

I may look young, dress young, talk with adolescent slang, and be interested in some geeky things that adolescents like, but that does not make me anything less than an adult. I am a professional, I am a student, I am a friend, I am a partner, and I am a geek.

When dealing with clients, we need to be aware that they are these same things. Regardless of whether they are geeks or not, we need to accept their interests as a part of who they are. Using a client’s interests to enhance treatment, if applicable, is important. It makes the possibility of finding insight much easier. I’ve written about using methods that are used with children and adolescents with adult clients before. I still feel the same way, but since then I’ve realized that we also need to acknowledge that they are adults as well.

Normalizing being an adult geek is difficult when society has given us the impression that we can’t be both of those at the same time. It’s time for us as geeks, and as clinicians, to start breaking that mold. 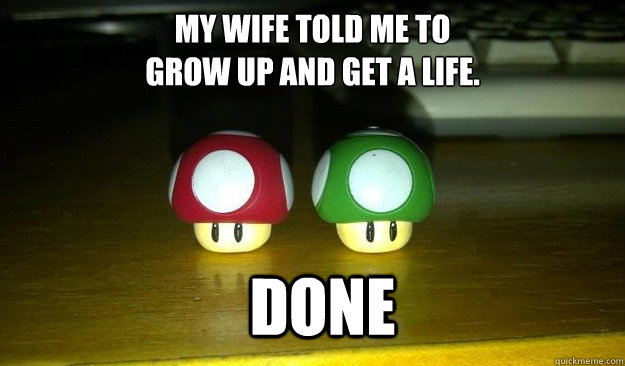 We can still grow up and embrace our interests.