What was YOUR Geek Therapy Recently?

So I just listened to the latest GT Radio and I really wanted to bring up what my Geek Therapy was recently but it didn’t seem quite appropriate to put it under the episode thread because it’s more talking directly about the topic at hand. But I think it’d be really nice to see what has been happening in other people’s lives that is geeky and has brought a bit of sunshine to your lives in recent times.

So tell me GT community, what was your Geek Therapy this week or even farther back?

I’ll start with mine.

This past weekend has been a Dungeons and Dragons fueled 72 hours or so. This past weekend, Wizards of the Coast had their “Stream of Many Eyes.” It was primarily a rather large advertisement and announcement of their next DnD books for 5th edition. I was looking forward to it because I watch Critical Role nearly every week live and because I recognized a lot of the guests they had on as well. There were about a dozen or so games streamed on the official dnd twitch channel and I watched basically all of them. It was a blast to see people enjoy DnD in all these different ways with diverse casts of guests and experience with the game itself. The new books also look super cool. Some people want to visit another setting outside of the Forgotten Realms but I think the new Waterdeep books look super cool. I’d love to see the WotC way of running a campaign within a city and their massive Waterdeep dungeon book, Dungeon of the Mad Mage should help me a ton with designing my own dungeons for my campaign.

On top of that, I had an artist commissioned to draw the DnD party that I am the Dungeon/Game Master of every other Saturday. We started playing last October so we’re not quite a year in yet but I’ve really enjoyed getting back into the Dungeon Mastering and preparing all of these different things. They’re all friends and I love exploring and putting my own spin on Tal’dorei and it’s been super therapeutic for me to work on this in my free time. The art was finished this past Friday so I finally got to show my party the finished art. Everyone was super happy and excited to see it and we spent a ton of time looking at all the little details. It made me feel super good seeing how everyone loved their characters being brought to life like that.

And finally, I have a Sunday DnD session as well. (Can you tell I like this game?) Yesterday was a super great session. Some people have had to miss sessions from time to time but last night we had a full party. My Warlock had a very scary time interacting with the Patron that he pledged himself to and I had a moment where only the DM and I were talking. And then after that, another party member had the same thing happen! I totally thought I’d be the only one to have that 1 on 1 time last night but it led to some great roleplaying from both of us. And now I think our characters are going to be very tight buddies in the future. Which is a big step for my character, because he’s very much so closed off and has been trying to avoid making friends with the other party members up until now. We also saved a group of mercenaries that my character was fond of from two Hill Giants that were attacking them. So it felt like I’m really getting into the swing of playing this character now and it was a super fun and happy time for me.

It’s really great to be a game master. I love writing worlds into existence and writing characters into that world and adding conflict. I love building arcs and wondering what the people in that world are like. I love it so much more than being a player.

Lately it’s been pretty lonely. Most of my friends moved out of state because this was our last year in medical school. My fiancé left for Texas to study for a pretty big test on August and for the time being I’ve been pretty much on my own. I’ve spent some time, studying in advance for a test I might take at the end of the year. On my free time though, I’ve been working on a FATE one-shot set in a Lovecraftian setting. I’ve been keeping in contact with a few of my friends sort of giving them teasers like this: 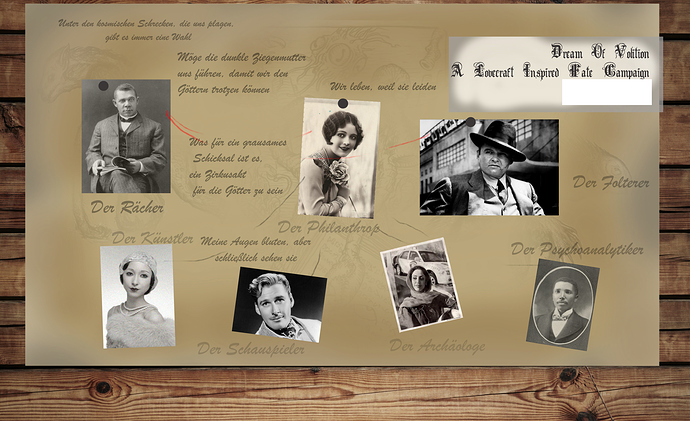 I’ve also been listening to the audiobook version of Annihilation which came out a while ago as a movie and I loved it. I’me getting back into writing which was a part of me that I neglected throughout medical school, because medical school just takes over your whole life. Because I am writing I’m reading Vandermeer’s Wonderbook. It’s an amazing book for anyone interested in writing fantasy!

My Geek Therapy this week was spending time at my local comic book shop and treating myself to a hard cover 15th Anniversary Deluxe Edition of Batman: Hush. I’ve wanted to read the series for so long, but I didn’t want to buy it on Kindle or Comixology. It’s going to be so nice sit down and really delve into it.

This season my Geek Therapy every week is watching the episode of Wotakoi Anime (Wotaku ni Koi wa Muzukashi); it’s been a while since I have found an anime to love that much; recently everything was about fan service, and I’m not a big fan of shonen, so I was missing this kind of series.

I appreciate any correction on my writing since English is not my first language.

Oh man that looks pretty great. I’d heard some good things about the FATE system but never gotten a chance to try it out personally. I’ll have to check out Vandermeer! I’m using the setting from Critical Role for my campaign but I’m trying to add little bits and pieces from all over to give it my own spin as to how things connect between planes and give more life and specificity since I can’t just contact Mercer whenever I want.

I totally feel you on this. I know I should read Kindle books more often but there’s just somethign about holding that physical book that makes me feel better while reading. I’ve still got my Warcraft Chronicles Vol. 3 and the 3rd book of the Stormlight Archives to read through but I don’t want to finish them because then I have to wait for more. What is this Batman story about? I’ve not heard about this one before, always been a bit more of a Marvel reader.

I’ve got something new to watch! looks interesting, I love slice of life anime! The female character looks like the protagonist from Kare Kano. If you are looking for other slice of life, Toradora and Pet girl from Sakurasou are nice. Pet girl starts out with some gratuitous fan service and i was discouraged, but a friend told me to keep watching and it became on of the most heartwrenching honest animes I’ve seen. Right there with Your Lie in April.

Ah, see I’m a sucker for shonen so it’s been a good time for me lately although I’ve fallen super behind on anime. Is Wotakoi more a slice of life anime then?

Writing Star Trek fanfic. Does it get any geekier than that? Haha.

Also, watching Wonder Woman. Few things make me feel inspired and hopeful about the world like that movie does.

Have you tried hosting a roleplaying campaign based on your fanfic using limited edition toys as the pieces for play? * Cue Inception music *

I could watch Wonder Woman every friday if I could.

Have you tried hosting a roleplaying campaign based on your fanfic using limited edition toys as the pieces for play? * Cue Inception music *

Haha no, I have never tried that. That might be too hardcore geek for me.

Yeah! I also thought about Karekano when I saw Narumi; I already watched Toradora and Pet Girl and loved them!

Yes, it is! It is about the life of four grown-ups otakus

So this doesn’t really fall under the “geek” umbrella, but it is pop culture and has been giving me all the feels since it came out last week… Queer Eye season 2. The first episode alone made me cry more than I had in a long time (including the Sense8 finale the previous week and I am such a huge fan of that show and loved every minute of it).

Loved the Sense8 Finale and Watching the first episode of QE was also amazing!

So, this is a recent geek therapy moment that was just too good to keep to myself. Has anyone else in the US been a bit spooked but also really thankful for the timing of the newest Doctor Who episodes? Literally the day after SCOTUS Kavanaugh gets confirmed Jodie Whitaker’s Doctor takes over in the series premiere. And regardless of how you feel about the appointment, the whole process was draining and highlighted how strained gender relations are right now so I found the matter of fact tone they took introducing the first female Doctor to be just what the Doctor ordered (pun intended).

This week though has been rough after the New York Times article about the current administration’s efforts to “clarify” the definition of gender and say that it is “immutable from birth”. As a transgender American hearing that the government wants to take away my civil rights because I “didn’t deserve them in the first place” definitely put me in a mood for the rest of the week. And then I watched the latest Doctor Who episode “Rosa”. I love that they didn’t sugarcoat anything. It felt as raw as I felt when I read that article. And I know it isn’t nearly the same degree of discrimination or hatred (most places) so in some ways it feels cheap to relate to that episode in this way. But it still restored a bit of faith in humanity and was pretty much the epitome of geek therapy for me.

TL;DR- Doctor Who is amazing and I really love it

I think its very relatable, the episode deals with three subjects in the racial climate at a time, the threat of lynching, the denial of services to black folk and the Rosa Parks seating debacle. To this day, some transfolk live in areas where the threat of violence is real; some businesses do not serve transfolk on “religious” or other political grounds; transfolk are denied sitting in the bathrooms of their respective gender. While every historical period has its differences, the politics of discrimination are essentially the same. So what you are feeling is legitimate and Im happy the episode did something for you. I loved it as well!